Large-scale horizontal paintings are suggestive of landscapes or seascapes. Boats flee a storm or city in flames. The paintings represent a break with the past. On a more hopeful note, “Esperanza” represents the desire for reconciliation. Esperanza means hope, and it is the name of the town in Cuba that my mother’s family comes from. Other paintings in this series also get their titles from poetically named Cuban towns. 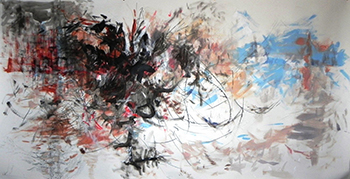